For a bank to arrange a cross-border transaction, it must either have both parties’ currencies in its possession or else have a means of buying the foreign currency required to execute the transaction. Whereas some of the larger international banks might have the banking license and liquidity required in the respective currency, viability decreases rapidly as the number of currencies at hand increases at a given time. Furthermore, complexity and costs are added because of differing regulatory standards across jurisdictions combined with varying technical requirements.

Most banks set up correspondent banking channels to still be able to host any trade. These are relationships with strategically selected foreign banks that are capable of handling the desired payment. The reason why such networks exist is both the extensive process of acquiring a banking licence in another jurisdiction and the respective cost burden. Since maintaining and leveraging these connections is not feasible for everyone, smaller, local banks tend to rely completely on larger banks to host cross-currency transactions on their behalf. As a result, more financial institutions and other intermediaries are involved than expected at first sight, thus increasing transaction fees and clarity. Few banks actually have the scale required to maintain a global network of settlement accounts in multiple jurisdictions.

Besides the reliance on correspondent banking channels, dependence on the operating hours of RTGS systems obstructs the desired flexibility in transferring high-value funds across the globe on a daily basis. A consequence is that there are only very small windows of time when the systems across different countries are open simultaneously. This results in cross-border payments getting trapped in a country, waiting for the respective RTGS system to open, and thus drive the time lag in cross-border transactions reaching their final destination. 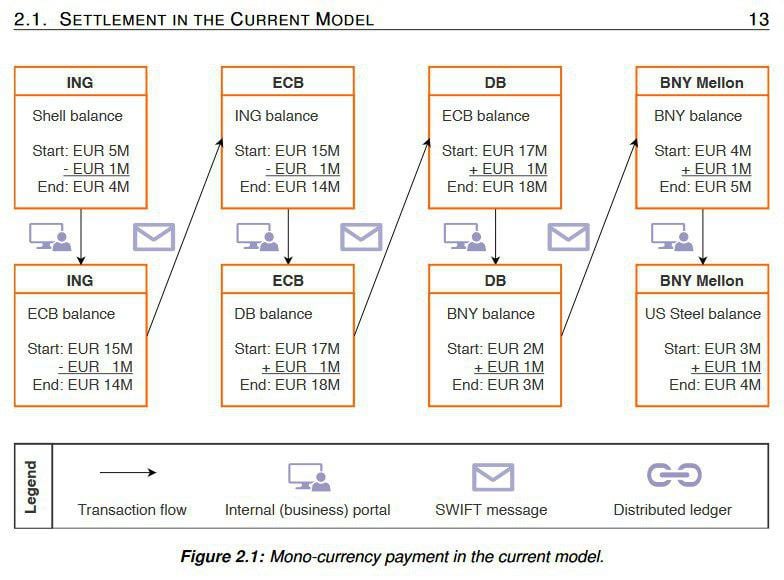 Figure 2.1 provides an example of a transaction in the current model. The transaction considered is a mono-currency single payment, which means that there is no exchange (of goods) involved. This example clearly shows the presence of intermediaries. It may take multiple days, and in some cases even over a week for a transaction to arrive at the Bank of New York Mellon (BNY Mellon) due to the existence of correspondent banking channels. Once Shell initiates a transaction, its balance at ING is adjusted through an internal business portal. Then ING sends a SWIFT message to the European Central Bank (ECB) with the transaction details. The RTGS system of the ECB adjusts the balances of both ING and Deutsche Bank (DB) at the ECB. Consequently, DB receives a SWIFT message with the details of the transaction, and forwards it to BNY Mellon. Once BNY Mellon receives the payment, it adjusts US Steel’s balance in the internal business portal.

For cross-currency payments, the model looks a bit different. Now ING must find a correspondent bank that is willing to exchange the EUR amount to a USD amount. An example of such a situation with Bank of America (BOA) as a correspondent bank is displayed in Figure 2.2. The third payment type we consider a a payment-versus-payment transaction. In this situation, ING does not only pay a EUR amount (on behalf of a client), but receives a USD amount in return. In the current situation, a simple contract for a Foreign Exchange (FX) swap is signed to cover potential FX risk, obviously against a fee. Figure 2.3 displays an example of such a transaction. 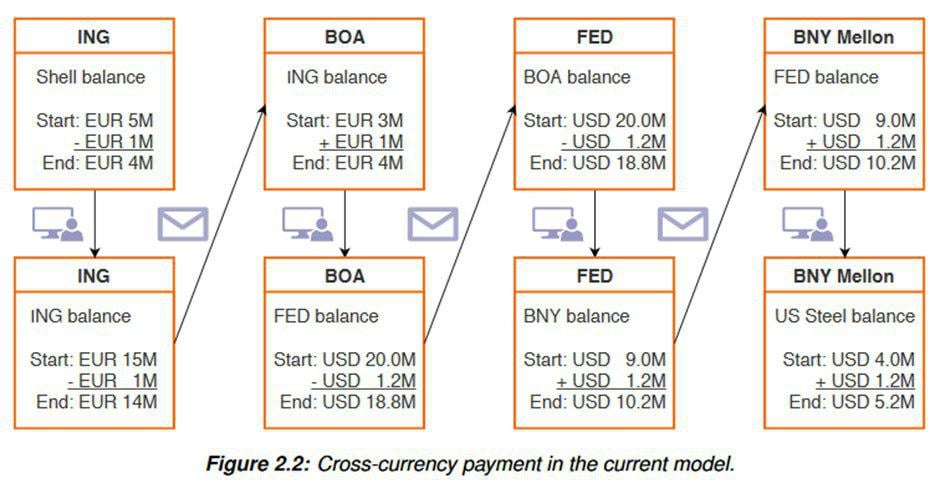 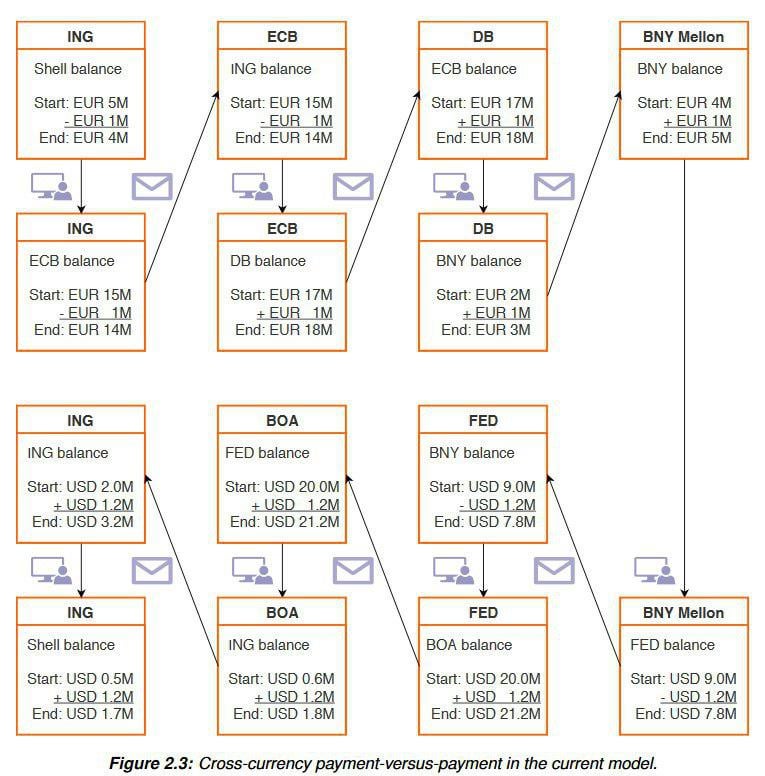 What stands out from the correspondent banking analysis is that the cut taken in a given cross-border trade is determined by the number of financial institutions that engage in and the complexity of the network in the transaction process. This opposes the view that the nations or currencies involved are most decisive in the percentage forfeited. The lack of payment status and visibility, delays in payment processing, and lack of round-the-clock service availability result in significant issues for international corporate transactions. Consequently, settlement times for cross-border payments can take up to five days even for most common currency pairings, generally with limited clarity regarding the total amount of fees to be charged and the timing of settlement. Nevertheless, a mono-currency payment is close to instant, as local RTGS systems (e.g. TARGET2) are very efficient. 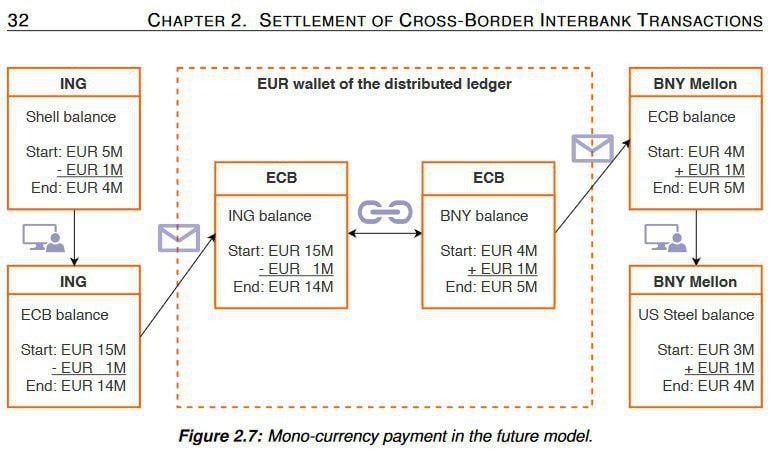 Whereas in the current model it can take multiple days and in some cases even over a week for a transaction to settle, the future model offers a transaction to be settled in a matter of seconds. Figure 2.7 displays the future situation for a mono-currency payment, in this case a EUR transaction. Like in the current model, a bank would still send a SWIFT message to the settling party. However, instead of using an entire network of correspondent banks, only one operation is performed now. A distributed ledger is established for each currency at which each bank holds an account. The balances of ING in their own account and in the account at the central bank are adjusted based on the SWIFT message. Subsequently, the transaction value is converted to an equivalent amount of tokens and ownership transfers to the counterparty, via the distributed ledger. Within a matter of seconds, BNY Mellon sees the transaction value added to is own wallet at the ledger.

If BNY Mellon were to withdraw money from its account, again a SWIFT message is created and balances are adjusted accordingly. The value of these CBDC tokens is backed one-to-one to its respective fiat currency to prevent for introducing additional FX risk during conversion. The CBDC tokens are liquid to such an extent that they are pre-funded by fiat. They are merely used as tools for transacting fiat amounts, backed by the central bank.

Depending on legal restrictions and reciprocal agreements between jurisdictions, any bank can have an account at the central bank that manages the distributed ledger of the currency it issues. For instance, the ECB manages the EUR ledger, the FederalReserve System (FED) manages the USD ledger, and so on. Another possibility is that some independent financial institution or governance authority is appointed to manage the new payment system. Legal risks arise when central banks in different jurisdictions are to gear to one another. Once the technology matures and sufficient experience with the new payment system has been gained, the SWIFT connection could be upgraded to a more direct message system. 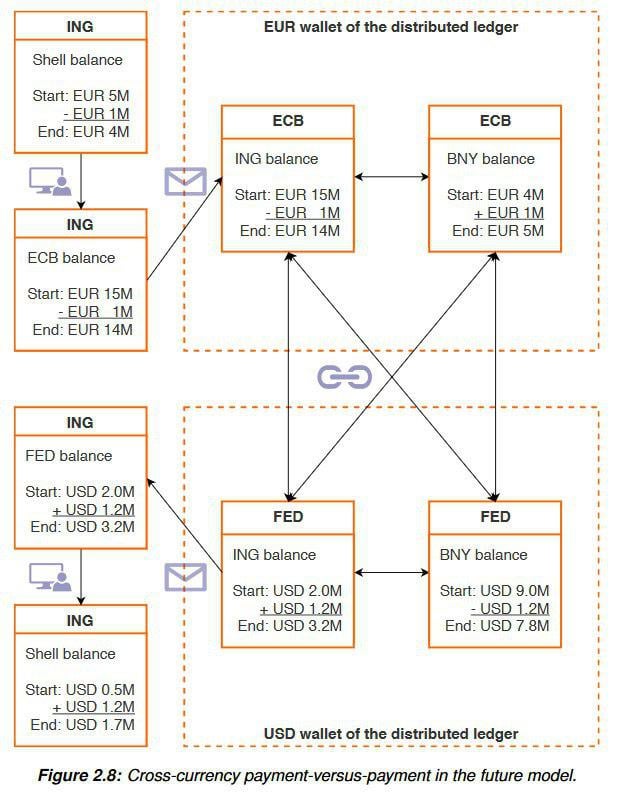 In the cross-currency PvP scenario, a currency swap takes place. Figure 2.8 depicts this situation, using the EUR to USD transaction example. The commercial bank still needs to find a counterparty, here BNY Mellon, that is willing to swap a particular EUR amount to a USD amount. When both parties have agreed to the transaction (via SWIFT messaging), settlement occurs through an atomic swap, which means that the transfer of USD tokens from BNY Mellon’s USD account to ING’s USD account and EUR tokens from ING’s EUR account to BNY Mellon’s EUR account happens at exactly the same time. This prevents the possibility of double-spending. ING would not need a counterparty such as BNY Mellon in this case. A major challenge for all affiliating parties, especially those who will have to design the technology, is interoperability.

There are three dimensions to interoperability: between two currencies on the same ledger, between different ledgers and between the ledger and legacy infrastructure.

The future model addresses all drawbacks of the current system. First of all, transactions in the current system are expensive due to fees and FX margins being accumulated at every step in the process. With the elimination of correspondent banks and only one settlement system in the future model, these costs should diminish. Obviously, the technology needs to be built, maintained, regulated and kept secure. Second, the speed of a transaction increases significantly. Whereas cross-border interbank transactions take several days to arrive at the counterparty, the future model offers settlement in the blink of an eye. On top of this, transparency and predictability increase due to the removal of intermediaries and rapid settlement. Lastly, the proposed system offers near real-time and round-the-clock availability of cross-border payment services.

All in all, we expect the future model to be far more efficient than the current model. The main difference lies in the way central banks provide access to their balance sheets i.e. in the form of a digital version of ordinary fiat without participating banks having to obtain a banking license in the respective jurisdiction to access the actual currency.

Ultimately, risk can be defined as the exposure of an asset to loss, generally due to a change in its value as time progresses. With time no longer being a factor in cross-border interbank payments, most risk vanishes as well. The analysis on financial risks of cross-border interbank transactions in a system with CBDC has marked five risk factors as relevant. First, liquidity risk is expected to decrease, as both cash pools at correspondent banking nostro accounts and separate central bank accounts (e.g. TARGET2, T2S and EBA) can be centralised in one account on the ledger in a new system, which leads to optimisation of LSM. We have quantified liquidity management advantages at a reduction in liquidity requirements of 21%.

Replacing correspondent banking structures by a peer-to-peer network with 24/7 access and instant settlement of payments reduces the time factor in cross-border interbank transactions to near zero. This significantly affects interest rate risk, since banks do no longer miss out on interest garnered by correspondent banks during a transaction’s processing period. Foreign exchange rate risk vanishes as well due to a replacement in price volatility between two currencies by an instant current-market rate. As banks will no longer be exposed to the possibility that both intermediaries and counterparties might default on their payment obligations, counterparty credit risk can be disregarded entirely. Additionally, atomic swaps (i.e. cryptographic hash functions stipulated in smart contracts) reduce settlement risk in PvP transactions.